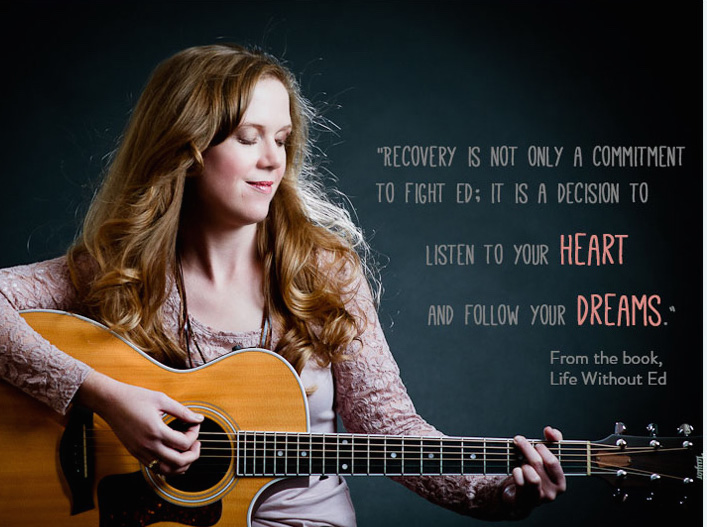 Discover Life after an Eating Disorder, after Trauma & PTSD

You’re Not Alone With an Eating Disorder, Trauma, or PTSD

Healing from eating disorders, trauma, PTSD, and related problems is possible. Jenni Schaefer suffered with anorexia nervosa for nearly twenty years. After she finally sought treatment for her eating disorder, Jenni struggled to maintain her recovery. While some days, she felt like her eating disorder treatment was going well, on others, she would find herself right back down the rabbit hole with Ed (her “eating disorder”), an acronym coined in her first book, the breakthrough bestseller, Life Without Ed: How One Woman Declared Independence from her Eating Disorder and How You Can Too.

Jenni felt trapped in her own life, unable to escape the anxiety, depression, and perfectionism that fueled her eating disorder. The symptoms of her eating disorder seemed to be getting worse. She often wondered, “Will I ever get better?”

Then, in the later stages of her eating disorder recovery, Jenni experienced trauma, which would eventually lead to posttraumatic stress disorder, or PTSD. Her PTSD symptoms would take over ten years to be diagnosed. Surprisingly, the average amount of time between the onset of PTSD symptoms and an individual receiving help is 12 years. 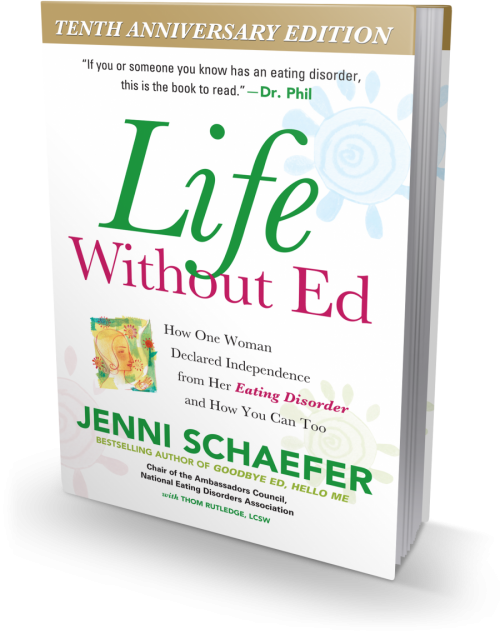 To understand PTSD, it is first important to recognize what is meant by the word trauma. Put simply, trauma can be viewed as anything that overwhelms your ability to cope. During a traumatic event, your life or sense of self might be at risk. You might feel horror or helplessness. Well-known examples of trauma include combat, natural disasters, sexual and physical assault, and accidents. Less known traumas can include bullying, divorce, or emotional and physical neglect. Witnessing a devastating event can also be traumatic.

Trauma is in the eye of the beholder. Something that is traumatic to you might not be for others. A key to trauma treatment is not to compare traumas, nor PTSD symptoms. Some who experience trauma, like Jenni, go on to develop posttraumatic stress disorder. In PTSD treatment, Jenni learned that PTSD is a normal reaction to an abnormal situation.

Other mental illnesses like major depression, bipolar disorder, postpartum depression, borderline personality disorder, obsessive compulsive disorder (OCD) and others can exacerbate both PTSD and an eating disorder. When the world seems like it’s closing in, as mental illness can feel like, it is time to find a mental health counselor or psychologist who can help. Seeking help for mental illness can be intimidating, yet finding the right type of psychotherapy and medical treatment is imperative.

Other signs of PTSD or an eating disorder might include:

Know When to Seek Eating Disorders Treatment and PTSD Treatment

With an eating disorder running the show, Jenni’s life was miserable and out of control. When she finally realized that she was unable to recover from anorexia nervosa on her own, she sought treatment. After some initial mishaps in finding help, she finally connected with a treatment team of experts who understood that there is more to eating disorders and treatment than meets the eye.

One of Jenni’s first doctors (an example of a “mishap” mentioned above) had ignorantly—and dangerously—told her, “You don’t look like you have an eating disorder.” 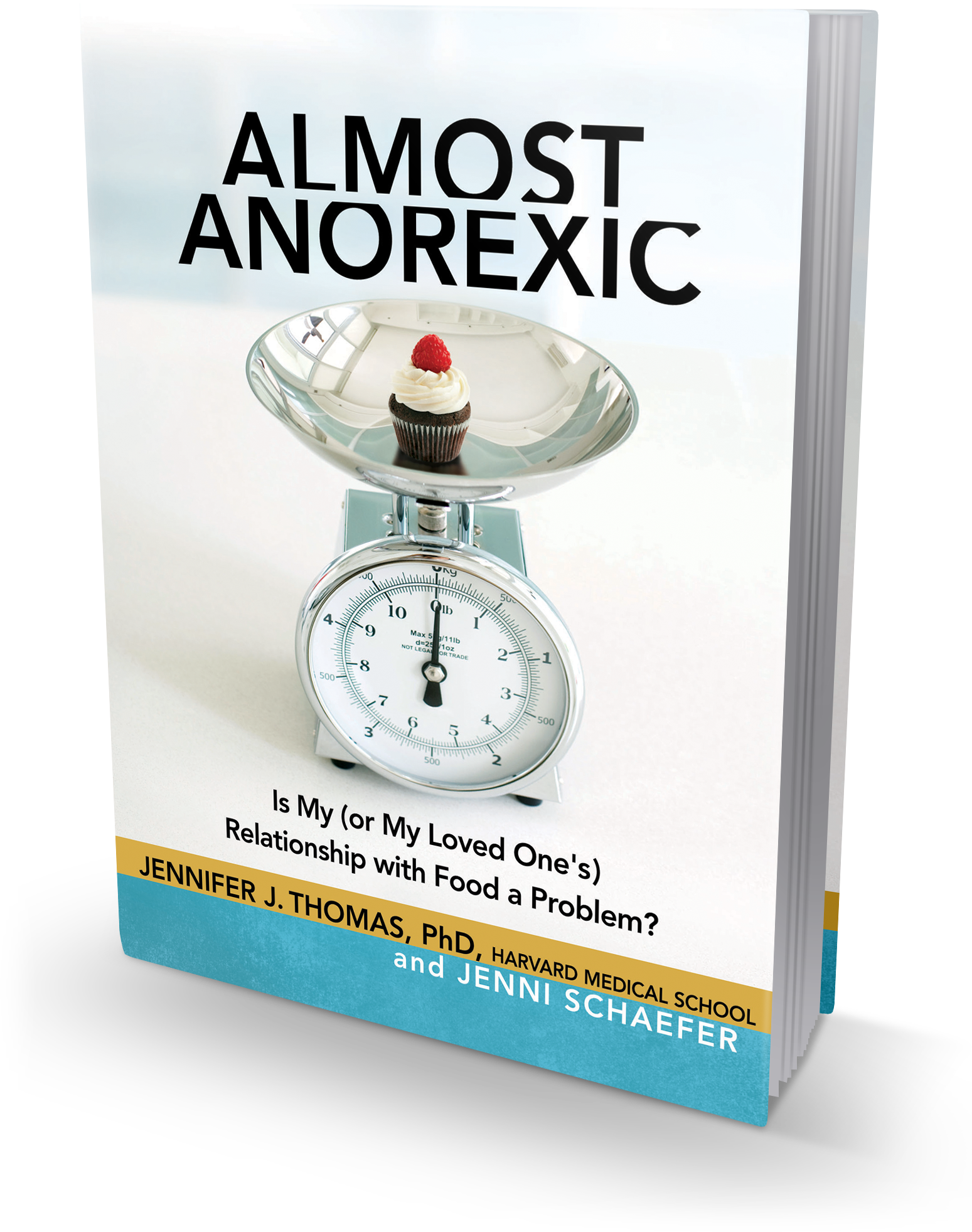 Ultimately, with persistence and continued care from eating disorders specialists, Jenni was able to overcome anorexia nervosa. In fact, full recovery from an eating disorder is possible! Jenni even wrote a whole book about how to completely let go of Ed; her second eating disorder book is called Goodbye Ed, Hello Me: Recover from Your Eating Disorder and Fall in Love with Life. 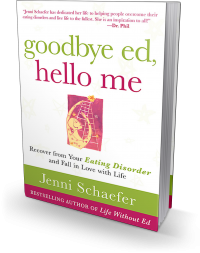 Years after Jenni recovered from her eating disorder, she realized that she struggled with PTSD. Again, she sought help, because the pain of her PTSD symptoms was unbearable—and impossible to tackle alone. (Today, Jenni encourages people to seek both eating disorders and PTSD treatment more quickly than she did. The pain doesn’t need to get that bad before getting help.) In trauma treatment, similar to her eating disorder recovery, she regularly asked, “Will I ever get better?”

After lots of falling down and getting back up again, and after much hard work in therapy with trained experts, the answer became: yes. Jenni healed from PTSD, and, gratefully, she did not even encounter Ed along the way. Today, Jenni wants to share this kind of hope with you. She is currently at work on a book about fighting through PTSD.

If your life feels unmanageable and unbearable due to the effects of an eating disorder or PTSD, Jenni encourages you to reach out for help from specialists who truly know how to treat these debilitating illnesses. With treatment, healing can happen.

How Eating Disorders Treatment and PTSD Treatment Can Help You

Many people, like Jenni in the beginning, shy away from seeking treatment, because they think they can handle their problems on their own. Some feel ashamed to struggle with mental illness. Yet, there is nothing to be ashamed of in battling a real, life-threatening illness that you did not cause, nor choose. You can, however, choose to get better.

Eating disorders and PTSD are complex illnesses to treat, as they require specialized and individualized care. Seeking treatment sooner can ensure a speedier recovery path with less bumps along the way. While these illnesses, once identified, should be treated as soon as possible, keep in mind that recovery can happen no matter how long you have struggled with an eating disorder or PTSD. Remember that Jenni had an eating disorder for nearly 20 years before getting help—and PTSD for over ten. She got better anyway. You are never too far gone to receive lifesaving treatment.

The Meadows Ranch has treated eating disorders in girls and women for more than 25 years. Recovery from an eating disorder as well as trauma-related problems, like PTSD, is possible. It’s happening every day at The Meadows Ranch. Based on feedback from patients, families, and professionals, the vast majority of our patients remain committed to a life of health, balance, and purpose.

The Meadows, Experts in Trauma Treatment, Addiction Treatment, and More

The Meadows exists to heal your unresolved emotional trauma and provide you with the tools to transform your life. Whether you or someone you love is entering treatment for the first time, or a relapse occurs, The Meadows Model is unparalleled in producing successful outcomes for recovery and a proven vanguard for treating trauma and addiction.

Jenni Teams Up with The Meadows

Jenni is excited to announce that she has teamed up with The Meadows as a Senior Fellow! The team of Senior Fellows, including Pia Mellody, Drs. Peter Levine, Claudia Black, Patrick Carnes and others, constantly challenge The Meadows to excel and stay current in all of their treatment programs. Yes, Jenni’s life has come full circle, as she now works alongside many of her longtime heroes in mental health—experts whose work (like Dr. Levine’s Waking the Tiger and Mellody’s Facing Codependence) helped to save her life.

Without the specialized eating disorders treatment as well as PTSD treatment, Jenni surely wouldn’t be in the place of joy, peace, and balance that she is today. In her books and presentations, Jenni emphasizes the importance of asking for professional help when you need it.

Don’t let anything get in your way of falling in love with life, possibly for the first time. If you wonder whether you (or your loved one) can heal from an eating disorder or PTSD, the answer is, yes, recovery can be a reality.

While lapses and relapses can be a part of getting better, looking back, I can see how these hurdles just served to make me stronger. When I thought I was getting worse, on the inside, I was healing. Never quit.

Are you ready to change your story? Choose recovery now. Then, keep choosing it. Ultimately, these moments of freedom will string together. You (or your loved one) will be free.

Is My (or My Loved One's) Relationship with Food a Problem?

Almost is too close to always. If you (or your loved one’s) relationship with food is a problem, read Jenni’s new book with Harvard Medical School.Read More

Recover from Your Eating Disorder and Fall in Love with Life

Don’t battle an eating disorder forever—recover from it completely! Read the first book of its kind that declares full freedom is possible.Read More

This groundbreaking book changed the way people look at eating disorders. Use it to change your life. Tenth Anniversary Edition (including audio!) is now available.
Read More

Jenni’s transformative message reaches businesspeople in a wide array of fields, including bankers, realtors, corporate executives, and others.

From Harvard, Princeton, and Yale in the East to campuses in Washington, Oregon, and California, Jenni presents in schools across the nation.

A wealth of experience speaking in clinical settings, Jenni brings a unique and inspiring perspective—from the other side of the couch.

Do You Struggle with an Eating Disorder, Anxiety, Mood, or PTSD?